Founded in 1983 by the current President Esterino Corti, Corti Zootecnici has been growing steadely and rapidly. In 1991 E. Corti purchased Rodari s.r.l. one of its competitors and a leading drinker manufacturer since 1961. This aquisition allowed Corti Zootecnici to become quickly one of the major drinker system and poultry accessories manufacturer in the world. Later on, in 1995, the company moved its headquarters to Monvalle, Varese, Italy, this uniting most of the production process under one roof.
The Corti Zootecnici manufactures in its own factory drinking systems for broilers, pullets, breeders, turkeys and layers. The product range includes nipple and cup drinkers, PVC nipple pipings, polipropylene manure removal belt, float tanks pressure reducers, plastic siphon drinkers, plastic hopper feeder all parts and accessories referred to the ground cage drinking systems for poultry industry and a lot of accessories for hobby and industry breeding.
The Snap and Superflow drinking systems represent state-of-the-art-units in floor breeding managment while stainless steel nipple and combi nipples have the leadership in cage breeding.
The new realisation is an automatic pan feeder system, which with its features, is considered the most innovative and modern pan feeder of new generations. 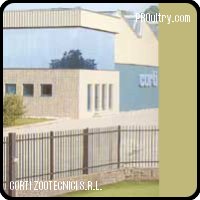