Bernhard Fienhage opened a cartwright’s workshop at the site still occupied by the present company in 1900. With the market for farm carts and carriages shrinking, the founder’s son Hans Fienhage (pictured on the right) took over the firm in 1955 and transformed it into a supplier of silos.
The company continued to grow during the years that followed. As the firm’s senior partner, Hans Fienhage continued with silo construction, while Hans-Jürgen Fienhage began to manage the production of laying nests for the alternative hen-keeping sector in 1987. This venture into a new branch of business also worked out well, requiring a radical restructuring of the company.
The company registered as Fienhage GmbH in 1991 was now a specialist in the development and production of henhouse equipment for the egg sector. Since 2008, the company has also been a producer of equipment for keeping broiler chickens. Various changes and additions took place in the years in between.
The firm’s production and warehousing facilities were expanded considerably in 2010/11, along with investment in the very latest manufacturing equipment. This was accompanied by the construction of a new office building and showroom. The company moved into its new office and plant facilities in November 2011. Thanks to optimised working conditions and procedures, we are able to guarantee top-quality products and services. Our workforce has continued to grow in recent years, and we currently employ 70 persons. 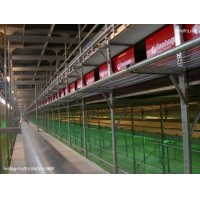 KL aviary
Open-sided, multilevel aviaries offer laying hens all the advantages of being in a natural, outdoor setting while giving the farmer a degree of monitoring and supervision that was previously available only in enclosed henhouses. A cleverly thought-o ... 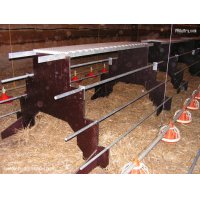 In non-battery production, chicks are reared on sets of racks with a water pipe running along the top. This ensures that the chicks learn to jump from one level to another. 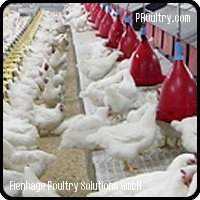